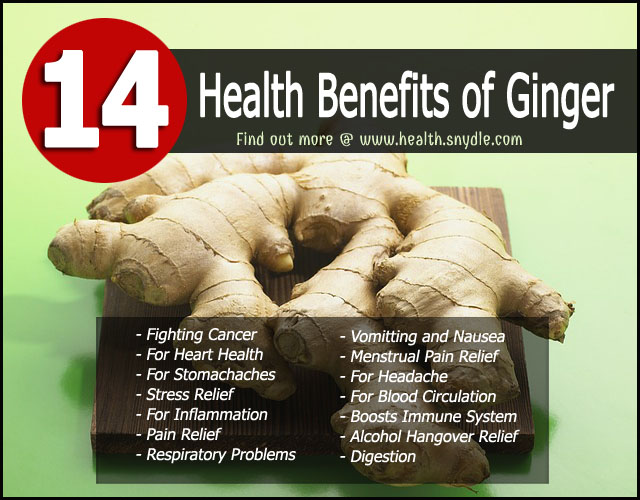 Ginger is a rhizome, commonly used as a spice in Indian cuisine. This herb belongs to the Zingiberaceae family, its scientific name being Zingiber officinale. It is believed to have been originated in South East Asia from where it spread across Asia and other tropical regions. It has been used since time immemorial in Indian and Chinese culture to treat numerous ailments due to its analgesic, anti-inflammatory and anti-emetic properties.

The healing properties of ginger come from its volatile oil called gingerol that is responsible for its strong taste and aroma. The enzyme present in this rhizome helps to decrease inflammation, pain and swelling. It is also known to increase the body’s metabolic rate and promote energy circulation in the body. These are few of the many benefits of ginger. Read on further to know about the benefits of ginger in detail.

Ginger is a powerful weapon against cancer. The antioxidant present in ginger induces apoptosis and suppresses the free radical damage in the body, reducing the possibility of cancer.  A research at the University of Minnesota has found that ginger may slow the growth of colorectal cancer cells. Ginger powder also induces cell death in the ovarian cancer cells.

The potassium present in ginger helps to control the heart rate and blood pressure. A study has reported than ginger extract is much more effective than prazosin hydrochloride in reducing the blood pressure. Consuming 1 inch of ginger daily can prevent the risk of stroke by preventing the fatty deposits in the arteries. Studies have shown that taking 1 gram of ginger capsule three times a day for 45 days can lower the triglyceride and cholesterol levels in people with high low-density lipoprotein.

Ginger tea has excellent calming properties and can help you get rid of stress and tension from your daily life. It has a strong aroma that totally uplifts the mood, relieving anxiety.

Ginger’s ability to combat serious diseases is due to its effect on excessive inflammation, an underlying cause of many serious illnesses. It inhibits cyclooxygenase (COX) and 5-lipoxygenase (LOX), two important enzymes that play a major role in inflammation. It is much more useful than anti-inflammatory drugs, which can only block COX, but do not affect LOX at all. Unlike the anti-inflammatory drugs, ginger does not cause any side effects like ulcer and stomach problems and irritation. It protects and heals the gut instead.

Ginger is believed to be the natural painkiller. It is very beneficial in relieving pain from muscle soreness and arthritis, menstrual pain, stomach pain and chest pain. Apply a few drops of ginger oil on the affected areas for instant relief. The patients are advised to consume 250 milligrams of ginger extract daily to reduce the arthritis pain. You can also add a few drops of ginger oil to your bathing water to relieve muscle and joint ache.

The antihistamine properties of ginger can help treat respiratory disorders and allergies. It inhibits airway contraction and stimulates the secretion of mucous; preventing the blockage of the respiratory tract. This natural expectorant breaks down and removes mucus, thereby loosening phlegm.  It clears the microcirculatory channels of the body, treating sinuses. This makes ginger highly effective for treating cough and persistent sore throat. Take one teaspoon of ginger juice with 1 teaspoon of honey three times a day for relief.

Several studies have proven that chewing 1 gram of ginger an hour before the surgery can treat the sensation of nausea following an operation. In addition, applying ginger oil to the patient’s wrist can prevent nausea in about 80% patients. Drinking a cup of ginger tea before heading for a flight can prevent airsickness. Ginger tea can also prevent morning sickness in women. However, it is advisable for the pregnant women to consult their doctor before taking ginger. Toss the ginger with honey to make it more palatable.

Ginger improves the absorption and assimilation of nutrients in the body, thereby improving digestion. It helps to break down the protein in the food. It also protects the stomach from ulcer by promoting mucous secretion. The carminative property of ginger provides relief from gastritis and bloating. It also helps to reduce flatulence. Take ginger tea with honey three times a day to treat indigestion problems.

Consuming ginger at the beginning of the menstrual cycle can reduce the pain and cramps that accompany it. A study has shown that taking ginger extract four times daily for 3 days at the beginning of the menstrual cycle could reduce aches in around 62% of women. It has proven to be as effective as ibuprofen and aspirin, potent painkillers. Soak a towel in warm ginger tea and keep it on the lower abdomen. This will relieve the pain and relax the muscles.

Applying ginger paste on the forehead can provide relief from migraine. It is as effective as sumatripatan (a medicine),  in treating migraine symptoms.  Ginger inhibits the prostaglandin synthesis, which helps to relieve pain and inflammation in the blood vessels.

Studies have shown that taking a combination of ginger with the pith of tangerine and brown sugar before drinking can decrease the symptoms of alcohol hangovers like diarrhea, vomiting and nausea.

Ginger contains magnesium, zinc and chromium that help to improve the blood  flow and prevent excessive sweat and cardiovascular problems.

Side Effects of Ginger

Ginger is quite safe for consumption, but can have some mild side effects on over consumption.

Some minor side effects include:

How to Use Ginger

Ginger can be brought in the form of oil, tincture and extract.  Take at least 2000 milligrams of ginger three times a day with or without food. Make sure the powder is not kept open for too long as it can negate the benefits.

How to Make Ginger Tea

To make ginger tea, cut two inches of ginger root into slices and simmer in one cup of water for about 10 minutes. Cover the pot to retain its volatile constituents as much as possible. When the tea is done, strain it and sip it before every meal. Once prepared, you can add honey, lemon or peppermint to enhance its taste.  You can also eat the boiled ginger slices. You should aim to drink at least 3 cups of tea per day.

Fresh ginger rhizomes should always be stored in a cool and dry place. Use ginger within 3 weeks for optimal benefits. Ginger supplements like capsule and powder should be kept away from heat and light.